For everyone, who loves having fun while destroying everything around, Just Cause is a real treasure. Here, you are going to act as a cool agent, who has plans, tasks and missions as well as an arsenal of crazy ideas. The forth part of the series includes numerous newish things you will certainly like. For example, if you were tired of the same missions in the previous games that repeated again and again, in this one you will have a huge variety of them. Gladly, now they don’t look all the same, as it was before. The plot and general outlook of a title reminds of the popular blockbuster movies, where everything is being blown up and crushed in a very thrilling and energetic manner. The character has a lot of special skills that remind of comics’ super heroes, so you will surely appreciate this entertainment and spend incredibly fun hours with it.

Despite the fact that the plot behind this title is not so complicated and well-thought, you will have a deal of missions and decisions to make on your own. The game doesn’t have a significant influence on your choices, so in most cases, you will do everything that seems right (or just fun) to you. Your main enemy is a dictator-president of the country and you will have to find and kill him at the end. The goal is clear and you will have to spend a pretty long period of time trying to reach it. Indeed, regimes can be improved only be destroying them.

When it comes to destroying, Just Cause must be a #1 champion. If you believe that explosions are beautiful and simply awesome, then you will have enough of them here. Literally every object will blow up when you make a damage to it, so do it and see how cool it is. By the way, the explosions can be serial and you be astonished by the repetitive “booms”, when one causes the next one. Destruction is something Just Cause provides to the fullest extent. Well, we know that this is something you have already seen in the previous parts of the game, but we bet that this detail is one of the most perfectly-made here, so hopefully you have nothing against good old detonations. The setting is also great. It has a variety of locations, that are so different and detailed, that you might feel dizzy. Just like in a movie, you will see the tropical forests, move around the towns and seashores, and even see the hills covered with snow. It’s all about discovering, travelling, and destroying, so if you want to combine these three perfect way to spend your time, make sure to try Just Cause. 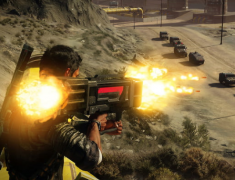 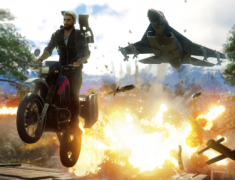